Everything about Jake Thackray was… wrong. His timing. His influences. His viewpoint. His singing style. Everything he did was pungently and uniquely out of step with almost every fashion of the second half of the 20th century. And yet, for well over a decade he skirted around the edges of public life on stage on TV, with a mocking, satirical eye and left a body of work which – were there any justice – would be treasured alongside that of the likes of David Bowie or Ray Davies. 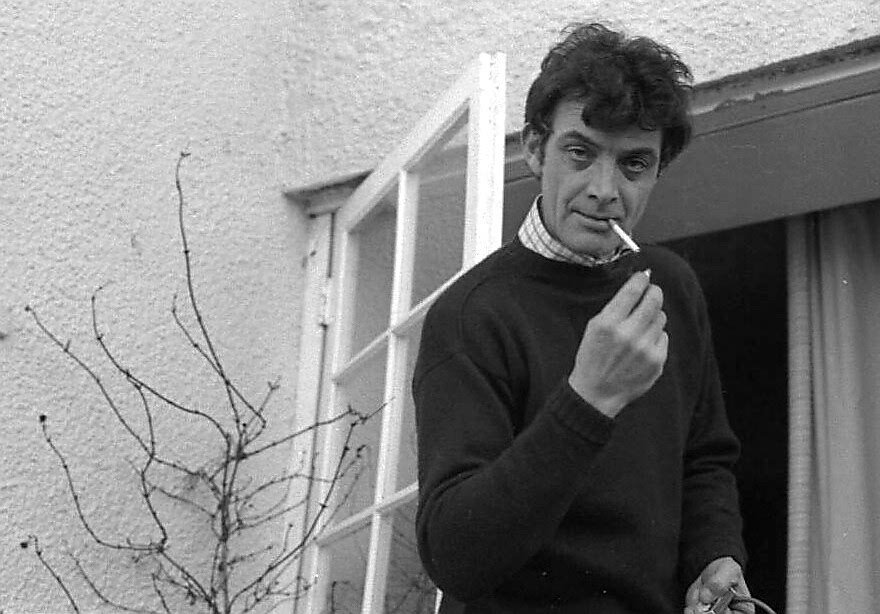 He sang jazz-inflected songs on a nylon-stringed guitar, in the style of the great French chansonniers, but delivered with a broad, flat Leeds accent. He arrived in the public consciousness with his rapid, clever, tumbling rhyming schemes singing about an utterly believable world that never really existed. As the world moved past psychedelia and into rock and heavy metal, he sat on flickering light-entertainment screens, accompanying only himself, singing of the absurdity of the world with a uniquely withering English eye for detail – out-Morrisseying Morrissey years before Morrissey was even a gleam in Morrissey’s eye. Certainly his claim to be a poet is far, far greater than many – like Lennon – who are lauded as such.

He found himself playing folk clubs but was never a folk singer. He had a unique gift for making the largest of venues feel intimate to the delight of the audience, yet never felt at home in such settings himself – preferring the intimacy of the pubs he sang about. A Catholic and broadly a socialist, but with an twisted view of the world that was utterly idiosyncratic and never really in keeping with any of the mainstream traditions of either faith.

I am, I will admit, a latecomer to a latter day resurrection of his reputation – but for the past couple of years I’ve been working through his back catalogue and coming to the conclusion that he is one of the great ‘lost’ gems of recent British culture. Had he perhaps presented himself more in the style of the times – setting his lyrics to a glam beat – he may well have carried all before him, but like all true greats he refused to kowtow to fads, and ploughed his own furrow heedless of the whims of contemporary fashion.

As it is, it might take a couple of listens to some of his songs to get used to his style and delivery, but I recommend a couple to you here now. For many, many examples – visit the Jake Thackray website.

The Hair of the Widow of Bridlington

This is a self-contained, three part story about the life of a feisty woman, widowed relatively young who refuses to mourn and sets about living life to its fullest: riding a motorbike, sleeping freely with the local sailors and refusing to obey the expectations of society. Eventually, society wreaks its revenge, as curtain-twitching neighbours drag her from her bed and shave her head. Undeterred, she buys a wig and decamps to “poor old bloody Scarborough” – utterly unwilling to compromise her life. The slower refrains, with their recurring motif of the blackbird are utterly compelling, and the final revelatory chord of each of these sections shows a compositional mind working at the highest levels. What a song!

“My only darling’s dead, he is, and all my children grown;
“The house has emptied, all the love-birds flown.
“In place of widow’s weeds I’ll let my coal black hair grow long:
“As glossy as a blackbird’s wing, as cocky as his song.”

And sometimes she would drop the shopping, leave the bed unmade
And sit till evening on the esplanade.
She’d sometimes go to church and call on Jesus by his name.
She fed as any blackbird would, whenever hunger came.

And she was fond of fishing boats and all their beardy crew
And partial to a salty kiss or two.
And some of them would gruffly whisper, “Marry me and stay”.
But blackbirds do their singing from a different bush each day.

And though she did no harm the neighbours sniffed, as neighbours do,
And day by day a cankerous rancour grew.
And many a pair of front-room curtains twitched and shook with rage,
For she was wild as blackbirds are and they were in a cage.

And when her sobs and hiccups stopped she tidied everywhere,
She cleaned the shed, she swept up all the hair.
Some few of them came back in shame to ask her would she stay,
But if you ever startle blackbirds, blackbirds go away.

Much of Thackray’s ouevre is comical in nature, but he could be as direct and as brutal as any protest singer or poet – although musically not aligned with any traditional folk style. Remembrance is sung from the perspective of dead soldiers – subverting the usual trope of remembrance, when the living remember the glorious sacrifice of the dead. Thackray turns it on its head, telling the story the other way round – asking us to remember the pomp and circumstance and patriotic fervour that sends men to war, and through each verse narrows the scope: from the king on the balcony in front of cheering crowds, through to two men – who are not unalike at all – trying to kill each other face to face in no glory at all.

Remember the bands and the grand parades,
The flags, the banners, the fine cockades,
And how we all looked up to see the King upon the balcony:
Who told us we were young and brave,
We’d never become the foreigner’s slave –
If the foreigner comes off best, he said,
You’ll be better off dead . . .
This was a couple of weeks before we got killed in the war.

Remember the drums and the trumpets played
When we set sail on the great crusade,
And how we all looked up to see the clergyman on the quay:
Who told us we were grand and good
To fight for God, as good men should –
If the enemy comes off best, he said,
You’ll be better off dead . . .
And this was a couple of days before we got killed in the war.

Remember the night before the raid
When the guns began the cannonade,
And how we all looked up to see the captain of the company:
Who told us we were bold and strong,
Let fame and glory spur us on –
If the Enemy comes off best, he said,
You’ll be better off dead . . .
This was a couple of hours before we got killed in the war.

Remember the shock of the ambuscade,
Remember the terrible fusillade,
And how we all looked up to see the curious face of the enemy:
Who was young, and shabby, and seemed to be
About as foreign as you or me –
I never did catch what the poor sod said
When he made sure we were dead . . .
This was a couple of shakes before we got killed in the war.

Perhaps the most typical example of his style (and perhaps his most famous song) is this hilarious tale of a “big bad burglar”, on the run for fifteen years, who has spent the time living in a convent, pretending to be a nun. I find it impossible not to smile at the humour, warmth and masterful storyteller’s eye on display here. It’s a fantastical yarn, packed with whimsical detail and inventive rhyming schemes at one utterly natural and completely unique.

The policemen say that Josephine’s a burglar in disguise,
Big bad Norman – fifteen years on the run.
The sisters disbelieve it: No, that can’t be Josephine;
Just think about her tenderness towards the younger nuns.

Admittedly her hands are big and hairy
And embellished with a curious tattoo.
Admittedly her voice is on the deep side,
And she seems to shave more often than the other sisters do.

No longer will her snores ring through the chapel during prayers,
Nor her lustful moanings fill the stilly night.
No more empty bottles of altar wine come clunking from her cell.
No longer will the cloister toilet seat stand upright.

← Kensington Skies (again)
In the Morning →