Ecce Mono: The Hotly Awaited Album From Reality TV Star Ian Freud Is Now Available In Record Shops Near YOU 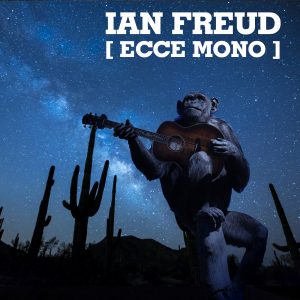 2020. What an intractable, dismal year. Despite being forced into seclusion by The Pestilence, and with nothing but time on my hands, my creative drive has been draining slowly away from my body all year. I normally churn out a song or two every month (you, Dear Reader, are subjected to but a fraction of my output) but this year..? Man. I dunno. How can you create when your heroes are dead, your enemies are in power, and The Pestilence has reduced the village to rubble? Anyway, in fits and starts, I have cobbled together an album. And my feelings are…. mixed. Anyway, do feel free to listen on your favoured streaming service etc etc. Here are the links to the Spotify and the YouTubes, but you can get it anywhere – and for nowt, which in these straitened times is a relief to us all, I’m sure:

The reason I have mixed feelings about it is that… a couple of the songs don’t sound great. I mean, none of them sound great – I’m not recording with a band of crack session musicians and an orchestra in Abbey Road, I’m a man in a shed with a increasingly recalcitrant iPad – but I’ve ballsed up some basic things on the final mix, which is disappointing. What it boils down to is a lack of bass in the final mix. And it’s a pity, cos I’m probably a better bassist than I am a guitarist and the bass is normally the part of the song that determines its tonality and key. So the bass is waaaaay too low in a couple of the songs and for me it half kills them on arrival.

Just as Bond films tend to be an overreaction to the previous one, so it seems I am doomed. My last album was far too light in the drum section, so I’ve veered way over the line in response so that this is all drums and no bass. Increasingly, I feel like Goldilocks. Only without the locks. Or the gold.

It’s been a weird year for my voice too. Last year I’d hit some kind of new high after putting in some serious practice hours: I could higher notes than ever before, and hit them cleanly and with real power. But this year I’ve been plagued with chest infections, coughs, breathing difficulties and a bunch of other stuff. None of it Covid (so you can still kiss me) but when I was doing a couple of final vocal takes in the last couple of weeks the results were definitely on the rough side of rough. But… this is what I sound like. I could drench everything in reverb and echo, compress everything to shit and plaster the whole thing in pitch correction, but then I might well be in Little Mix (on which note, I’d like to stress just how very much I’d like to be in Little Mix).

The songs themselves are, as you’d expect, a mixed bag. I don’t think I have A Sound, so you get the usual slightly odd mixture of psychedelic rock, pop that verges on prog, some country and blues – even a light smattering of jazz. Lyrically there are songs about race riots… lockdown fever… being a stalker… dementia… and, of course, robots lost in space. As with the vocals: it is what is it. A scattershot cross section of things that have crossed my mind this year. Sometimes basically an extended joke, occasionally verging on the dangerously personal, and mostly in between. If lyrics are your thing, you can check them all out here. Overall? I’m pretty pleased for the most part.

So there you have it. Four albums and an EP (the tracks of which also appear on this album as well) since I embarked on this voyage in 2018. Thinking about it like that – and when you consider that The Killers have managed 6 albums in 14 years – I think it’s safe to say that I haven’t quite run out of creative steam.

But, of course, you’re already leaning in, desperate to know what I’m up to next. Well, there are THREE projects I already have in mind.

The first is a long-mooted album that is much more rooted in blues, folk, and country. I’ve got some songs already in this vein that haven’t had a proper release yet, but I’m working with my long time guitar collaborator Den to write some more, and record them as ‘live’ as possible. He’s chipping in some numbers as well, so the creative burden won’t all be on me. I’ve loved playing with him over the last decade or so – and looooong before that, he was the first guitarist I knew in person who was WOW. So that’ll be fun.

The second is a trawl through songs I wrote during the Britpop years. Some of them I’m still very fond of – even though they are Britpop-lite, even though they are horribly dated, and even though I can’t necessarily remember everything about them, they’re still… there. Lodged in my brain. Banging on the inside of my cranium, begging to be let out into the sunshine one final time.

And lastly, I’m doing a prog album. Fuck it. Why not?

← A Moment in Time
Closing Time →