Peter Was a Lorry Driver

To celebrate the death of Jesus, I spent the Easter weekend writing this abstract piece of melancholy electronica about Peter Sutcliffe, better known to you and I as The Yorkshire Ripper. While I was still very young when he was caught (in 1981, when I was 6) I do have a couple of powerful memories of the time, and a lot of residual anger towards the way the world worked at the time. Anyway, more of that later. Here is 10 minutes of largely atonal noise and spoken word to put a spring in your step!

There. That wasn’t so hard was it?

The West Riding of the 1970s and 1980s now seems impossibly different. But I used to look at through the windows of the back of the car as my dad would take us places to keep us entertained.

Leeds was a land of desolate canyons. Decades of soot had turned the surviving Victorian buildings inky black, rendering their ornamentation almost invisible. They alternately crouched under or lowered over the more modern buildings: featureless slabs of concrete, erected in post-war haste, reeking already of smog and cigarette smoke and municipal function. Should you walk along Boar Lane today, with its gleaming invitations to shop or eat, it is hard to imagine that pornographers jostled alongside carpet warehouses. 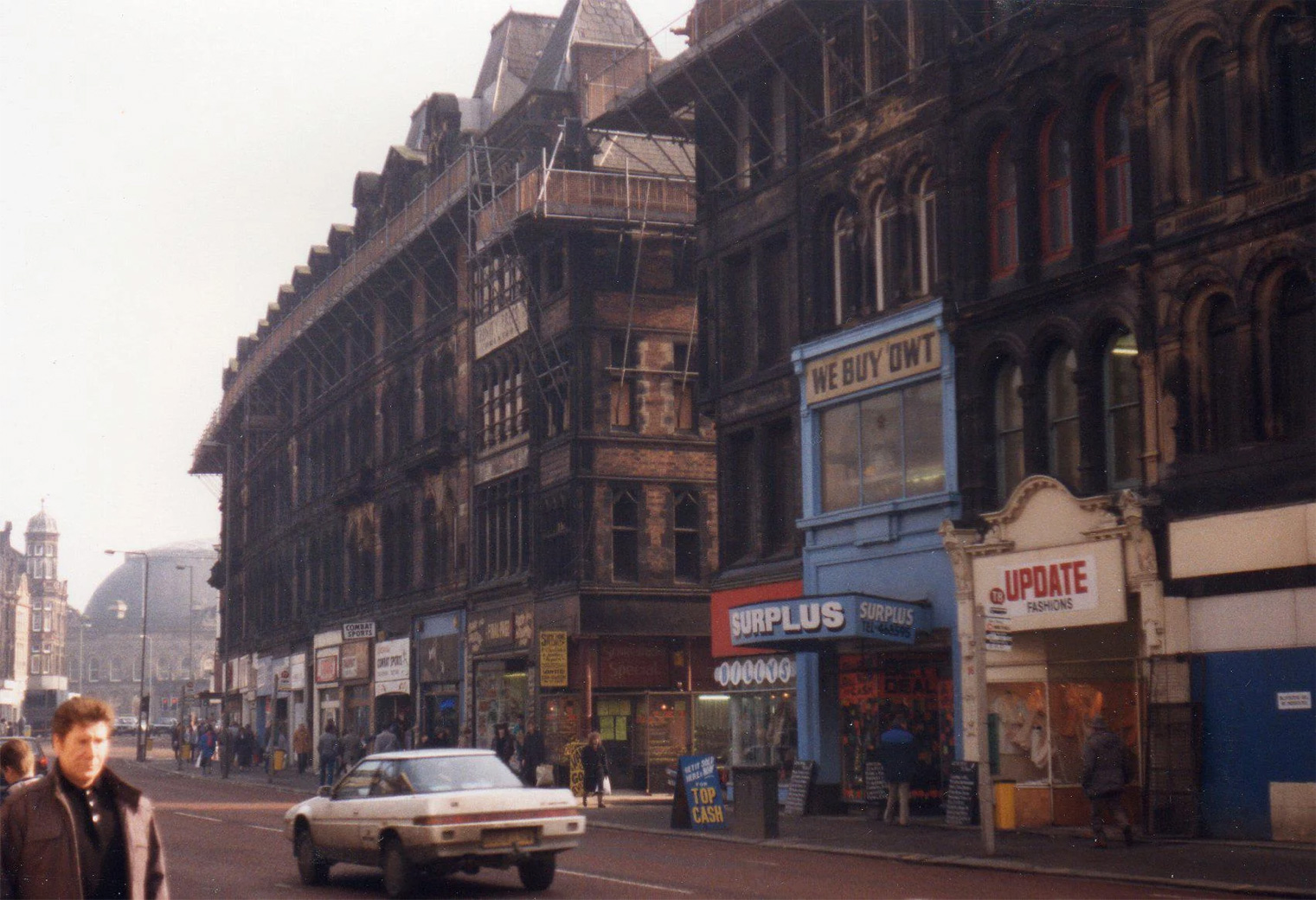 The streets were a forest of ugly signage – Leeds having declared itself to be “Motorway City” and invited cars by the thousand to drive along its most historic thoroughfares. The wide boulevard of Briggate, jewel in the crown of Leeds’ retail, was choked with traffic until well into the 90s.

And alongside these ugly roads ran rivers of ugly people: the casual violence and prejudice of the times reflected in faces and clothing. This was still the time of the feared football hooligans and The National Front, of faces marked with the scars of glassings and Stanley knives.

And that was the relative glamour of the city centre. Just beyond its confines was a dense network of dark streets. Blackened terraces. Empty warehouses. Wasteground. Terrifying pubs standing alone amid rows of gap-faced houses still waiting for the wrecking ball.

And it was here, in these street, that the Yorkshire Ripper plied his trade. Ultimately, time would show that he was a Bradford lad but, like all of the North, Leeds cowered in his shadow.

And that’s my other memory. I didn’t live in these streets. I was the child of a suburb that could still reasonably be called a village. The streets were clean and beyond the gardens were countless acres of fields and hidden copses.

But even here, my mum wouldn’t let me go to Andrew Lee’s house. Maybe 400 yards along a well-lit suburban road, far from any of the Ripper’s usual hunting grounds, she wouldn’t let me go by myself – and she certainly wouldn’t walk me there.

I knew distantly, in the way that children do, why. I picked up the whispers of the Ripper’s name in the rumour of the playground. His name echoed through the news and across the front pages of the Yorkshire Evening Post that my dad had open on his knee.

And, of course, he was caught. We know his name. And his background.

But we also know the ugly truth of the police efforts to catch him. Bound up by their own malevolent prejudices, they practically blamed his victims for their deaths. They covered up their own shortcomings – having interviewed Sutcliffe NINE times before his final, and accidental, arrest. To cover up their incompetence, they connived with Sutcliffe and his psychiatrists to try to get him, incredibly, tried on murder of grounds of diminished responsibility: to create a shared fiction that he was schizophrenic.

So this bit of… music… is an attempt to recreate something of the aura of those times. The steady pulse of time accelerating slowly as, over 6 years, he murdered at least 13, and attacked a further 7 – some of whom still survive with the terrible legacy of his attacks. And then, the “absolute delight” of the police who finally caught him, followed by the hamfisted attempts to cover up. The magistrates who commended police efforts. The suppressed reports. The final victory of moving Sutcliffe from prison to a mental hospital.

All the spoken words you hear are from people of the time: police officers, psychologists, surviving victims, witnesses, news reports.

And, lastly, the voice of Sutcliffe himself. From a phone call recorded a few years ago by a woman who had gained his confidence in prison. In it, he expresses sadness that he misses seaside holidays: the banality of his evil fully laid bare.