Fleetwood Mac: Man of the World 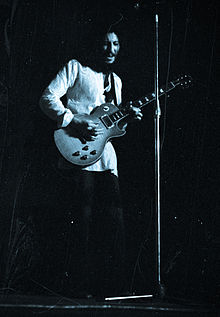 The story of Peter Green is a story that chimes with that of Syd Barrett: a suburban, English white boy who found unexpected personal resonance in the music of Black America, but whose gifts were lost in the psychic turbulence of a counterculture that descended from the bliss and joy of 1967 to the ruin and despair of the decade’s end. Each left their own cultural mark primarily as rock’s “lost boys” – known as much for their disappearance from public life as for the innovative music they made in their fleeting spell in the spotlight.

Meanwhile, the bands built largely around their unique talents moved into an entirely different stratosphere of success throughout the 70s: platinum albums… huge stadia… iconic album artwork. Pink Floyd and Fleetwood Mac somehow transmogrified from the vehicles for the intimate, deeply personal visions of their founding members into rock colossi that spoke to millions through a kind of digestible universality and slick musicianship.

They both ended these most productive part of their careers with dark, troubled recordings. (Peter Green’s The Green Manalishi occupying the same fractured mental space as Pink Floyd’s Jugband Blues) but many observers point to Man of the World as the start of the change in Peter Green’s psyche.

It’s a song that’s haunted me since I first heard it on a cassette in around 1990. As I was picking up the guitar for the first time, I was listening to the second-hand Canon Of Great Music from the 60s and 70s, passed down from older kids and the record collections of their parents.

Much of it – like The Doors and other self-consciously portentous acts of that ilk – left little impression on me, but Man of the World stuck like a limpet. Only now with half a lifetime under my belt has it really come to resonate on a psychological level (partly informed by things I’m struggling to overcome).

Musically, it is simple in construction but the actual recording is full of tricksy moments to keep you on your toes if you’re playing along. Most notably, the rhythm parts noticeably lag behind the main guitar figures – lending the song a kind of uncertainty that fits the lyrical themes like a glove.

The main chord change of the verse is also unexpected in some ways. It drops from the opening D to the fifth of A and then onto the minor fourth of a plangent G minor (throughout, there are two guitars whose interactions are an absolute all-time case study in how to write complimentary parts – the A, for example, presenting as a 6th). This is a subtle inversion from more traditional progressions, which would ordinarily segue from the fourth to its minor form. In this sense, it fits neatly with the general freeing of popular music from traditional tropes that the Beatles had initiated with their blithe disregard for orthodoxy in the first half of the sixties.

Like much great songwriting, this chord change is then twisted: moving to Em before landing on an unexpectedly ambiguous B minor. Musically, of course, these chords fit perfectly into the natural key of the song, but the their use shows how even a prosaic set of chords can be deployed in unexpected ways to create a tone.

After two verses (and a hauntingly lyrical guitar solo) the underlying restlessness of the song finds a new expression  – shifting to a brief, hard-edged excursion into a rocky F minor/E minor change chock full of angular riffing and buzzing guitars. Finally, the song returns to the verse before ending on a note of exquisitely resigned gentleness over the same Fm/Em axis: presented this time with what is almost a touch of soft jazz.

While not being born of the traditional wellspring of the blues in musical terms, it is completely of the blues thematically.

If one were to be uncharitable, you could argue that it is a standard “rich man’s lament” – but to me it touches on one of the universal underlying truths of life: you can have everything and yet it can all count for nothing. The blues is an expression of longing: laments for things lost, whether in the form of material things or elements of the soul.

Is there a more direct expression of that in rock than Green’s second verse?

“I guess I’ve got everything I want
I couldn’t ask for more
And there’s no one I’d rather be
But I just wish that I’d never been born.”

For various reasons which I can’t articulate here, this speaks very directly to my own regrets and laments at this point in my life. I may never be able to do full justice to this song, but I’ve started incorporating it into live performance. So, without futher ado, here I am performing this haunting track live – completely with my frankly massive head.

Man of the World: Lyrics

Shall I tell you about my life?
They say I’m a man of the world
I’ve flown across every tide
And I’ve seen lots of pretty girls

And I need a good woman
To make me feel like a good man should
I don’t say I’m a good man
Oh, but I would be if I could

← Stone Roses: One For All
People Are Strange (Original Song) →