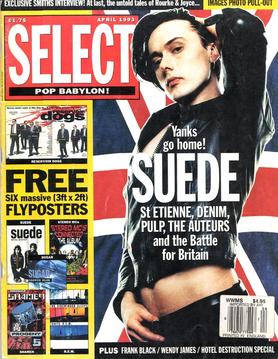 For a brief period – perhaps three years between 1994 and 1997 – British music enjoyed a final resurgence of glory reminiscent of its heyday in the 1960s. Great bands still exist and  great music continues to be made, but today’s musical landscape has been fragmented by the rise of the internet to such a degree that it’s almost impossible to imagine a similar “scene” ever evolving again or taking hold in the popular consciousness.

You could, of course, argue that the whole thing was merely a contrivance of the music press – and there is certainly a kernel of truth in that; but then our collective view of almost all past events from 1066 to the rise of ISIS is shaped by our media – and that does not mean those events didn’t happen, or that they don’t carry the weight ascribed to them. And besides: this blog isn’t here to lob chippy bombs at the press. It is what it is.

Enough! We’re here to look at we now collectively know as Britpop, and over the next few weeks, I’ll be disinterring and assessing some of its artistic (or at least most popular) peaks. At the end, if I’ve formed a clear enough mind on the matter, I will reveal to you – my breathless audience of 3 occasional readers – what I consider to be the ‘best’ of the Britpop era.

I’ve chosen – sort of at random – the albums that I think cover the fullest spectrum of Britpop in a roughly chronological order. It was a diverse thing (hence why some people say it was never even a thing at all, but if you want to argue that point you can start your own blog) so I’ve tried to take a little of everything – and of course it wouldn’t be sensible to miss out the ‘Big Three’ of Oasis, Blur and Pulp. Naturally, that means no coverage for The Bluetones, Echobelly, Elastica, Sleeper, Menswear and the rest and that too is tough titties.

Without further ado then, here are our contenders: swaggering out of their respective corners, towels slung around their shoulders, muscles glistening once more under the spotlights as they come out for one final, mighty contest.